We family historians get quite excited at discovering a black sheep. Why do we react that way?

Well, we know our ancestors weren’t all boring, diligent farmers and blacksmiths and housewives and students and salesmen and clerks and milliners. One might think so from the too-often little we can dig up about them. Someone who disturbed the norm, caused problems, or attracted attention, usually in a negative way, ... in so doing created written and remembered versions of the event(s). It works the other way as well: ancestors who did something admirable, beneficial, or creative also leave their marks.

Our ancestors were human and faulty like us. Finding written sources about bad acts gives us some insight not only into the individual, but perhaps also about the effect on the family and the community. Dealing with an ancestor and event a couple of generations ago, we have distance from the original emotional consequences and pain. The following became of interest because of the name, although there is no family connection.

It’s a matter of record that a man called Neil McFadyen murdered James Kerr in Nova Scotia in 1848. What “record”? I have only two sources relating the story with slightly differing details. The Life and Adventures of Detective Peter Owen Carroll by N. Carroll McIntyre was my first encounter. 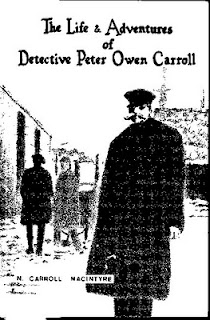 This version implies MacFadgen met James Cair right off the boat, so to speak, at Pictou, and took him to his home at Blue Mountain [written in the vernacular, the author uses phonetic surname spellings]. The next day Kerr was murdered for the cash he carried to purchase some land. The body was soon found but not identified until Kerr's father arrived from Scotland to search for his son. Identification was made from some of his clothing but more significantly by a lump on his jawbone from a childhood accident. It was known that McFadyen was the last person to see the victim.

The other version is a narrative of the coroner’s inquest in Nova Scotia Archives & Records Management (NSARM). I have a partial transcription without an archival reference. To me, it appears to be what a newspaper reporter might have published. Here we learn that Neil McFadyen arrived in Cape Breton with his father’s family in 1827 from the Isle of Tiree. He married a McKinnon woman (no first name) in 1830 and moved to “Moose River near the Garden of Eden, a lonely place in the back settlements of Pictou County” where he built a log house. He had “a number of children.” With a minor history of theft incidents, he went to work at a lumber camp in Chaleur Bay, New Brunswick. That’s where he met the unmarried Kerr, whose dream was to buy a farm, and beguiled him with tales of good land back in Pictou. Apparently Kerr’s father was already on this side of the Atlantic, in New Brunswick.

Two months or more elapsed until Kerr’s father and a brother were alarmed enough by the lack of communication to come to Pictou. Identification of the decomposed remains was dependent on clothing details. Then Kerr's vest and other possessions were found in McFadyen’s home, so Neil McFadyen went to trial on circumstantial evidence. He was convicted and hanged on 20 December 1848. My enquiry to municipal authorities revealed the improvised hanging took place on the beach at Pictou where he was buried under the sand with no marker.

Two derivative sources ... telling us something about Kerr and his family but not so much about the perpetrator. A descendant would be looking for potential court records, newspapers, census returns, to try to form a more complete sense of the man. We’d like to think McFadyen’s wife and children eventually overcame this trauma and found some normalcy in their lives.
Posted by BDM at 20:07

Sometimes I do find it difficult to believe my ancestors were human, Brenda, and then along comes some snippet of information that reveals they were not much different from me. Those little stories and bits of information are the most important parts of my family history.

Thanks for the comment, Steve. I think it's important that almost forgotten stories get more exposure that the Internet now provides. Genealogists can't ignore the sad or hidden aspects of family history. I do like the statement of ultimate relationship (and humanity) "We are all cousins!"