[Memo to Self: Know your geography. Know your county boundaries. Know your parishes. Maps, maps, maps.]
I’ve said that before in so many words, and am not too proud to admit mistakes (Parkhead, sigh). Luckily my cognitive skills are not so impaired that I couldn’t rescue a 30-year-old error. Reviewing old research, to my bemusement I discovered I’d misplaced a county. Or rather, identified a place name with the wrong county.

Here I’d been claiming West Lothian (alone) in Scotland as my ancestral grounds. Branding my Dougalls, you might say. After all, the important marriage took place there (the emigrant couple), when that county was known as Linlithgowshire. Once upon a time the River Almond divided two counties and all the little nearby places where John Dougall once lived and worked.

“Linlithgow” certainly struck a repeated chord in the collective family memory for five-six generations. No-one ever mentioned Midlothian or Edinburghshire. And yet, that is where most of the action took place. As much action as I can uncover.

Our John Dougall was baptized in West Calder parish, commonly ascribed (had I understood it) to placement in the County of Midlothian. It seems almost certain he was born at Parkhead—named as his parents’ residence in the parish record—in Linlithgowshire. For some reason, John’s parents ignored the kirk at Abercorn near Parkhead. Each time a new Dougall came along in the 1780s they  travelled about thirteen miles and across five parishes to West Calder in a different county for baptisms. Needless to say, family ties are suspected for the aberration. 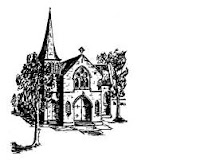 For a long time the town and parish of West Calder were in Midlothian. ’Twas not always thus. Formerly, they sat in the County of Edinburghshire. The boundary between the two counties changed somewhat in 1891—long after my people left—just enough to confuse historical research. In fact, twentieth century decisions changed Midlothian to Lothian Region, and then West Lothian Council replaced all former administrative names.
The illustration is of a church that today lies in ruins, having been replaced by a new kirk in 1880.

Rest assured, West Calder was not playing musical chairs, but has always occupied the same position on the south side of River Almond since at least 1647. The Family History Library microfilms have the Midlothian label. My old gazetteer goes with Edinburghshire (the maps and print are so tiny only an insect could read them; I should have hired an ant to decipher).[1] The National Archives of Scotland uses either name indiscriminately without regard, it seems, for appropriate time periods. Scotland’s Places explains all, praise be.

The title of a genealogy or family history normally includes—at a minimum—a surname and associated place name (identification). Perhaps “the Lothians” here would be an acceptable glossing over. Titles are not the place to muse as above. Having already screwed up one self-published family history by forgetting the wonderful cover illustration,[2] recklessly onward I plunge. 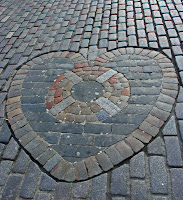 Edinburghshire/Midlothian definitely re-shaped my hypothesis about the origins of John Dougall’s grandfather. The man appeared in 1752 in West Calder to baptize his first known child without the kindness of revealing his own baptism or marriage record. My list of his parent-candidates takes on a new perspective. I can dispense with the previously-favoured Highland fantasy and gather romantic notions about Heart of Midlothian. The place, not the book. Or both ... who knows.
Photograph, Heart of Midlothian, Royal Mile, Edinburgh, David MacClean, 2004.

The picture representing the Kirk of Calder is not in West Calder at all but is in fact in Mid Calder, 5 miles away :-((

Thank you, Fred! This is exactly what I need ... input from someone on the ground, so to speak (it sure beats squinting at maps). I have not yet been so lucky to explore the precise area in person. If you can direct me to the appropriate photo for the West Calder church, if there *is* one on the Internet, I'd be very grateful. We "distant" genealogists are always hungry for information and hope to receive news and corrections. You can always reach me: brendadougallmerriman "at" gmail.com. Thanks again for helping set straight my family history.