Camels: No Go, No Show

Saving up my camel experiences to dole out slowly, savouring one post at a time, hit a serious road block. The blockage is apparent to anyone who reads the news lately. Even if all you can bear are headlines, you will know that the Middle East is in an uproar. The wind of change is blowing through this region ... with apologies to Harold Macmillan.[1] My preferred camel countries are now pretty well off-limits for slightly adventurous over-the-hill ladies who appreciate the creature comforts of escorted tours.

Now that I have the hang of the tour business, I know I can weasel a minimum half-day camel ride by choosing the right time and place. Notwithstanding an obsessive-compulsive tour leader. Tours have a certain-shall we say-conformity. The spirit of adventure applies to reasonable defiance in the face of regimentation ... and the best companies are flexible. 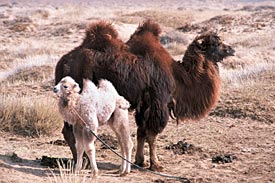 To be fair, there are plenty of countries other than the Mid-East where I could access camels. Australia is over-run with the poor starving beasts. Mongolia has plenty of the shorter, two-humped (note to self: less impressive) Bactrian sort. Many tours of Morocco touch on the Sahara for a token camel pose, shades of Giza (note to self: been there, done that, moved on to intermediate level).

In a list of attractive no-escorted-tour opportunities, Timbuktu gives you the complete and unabridged Sahara but I hear the outlaws have a nasty habit of kidnapping foreigners. Libya offers (i.e. offered) a desert oasis where you can stay for days in modest comfort and ride from sunrise to sunset.

Would you believe Texas has at least one camel enterprise? I do my research. With respect, Texas lacks cachet in the exotic department, although I could bring my cowboy boots. On second thought, Doug actually takes people into the Sinai and has deep contacts there.

But my preference is for camel countries + Bedouin. It’s been over a year and the restlessness grows. The trip to Syria—aaahh, a full day on the majestic animal among the glorious Palmyra ruins—was cancelled for sadly understandable reasons.
Meanwhile, the UAE went ahead without me at their annual Dhafra Festival. And of course they have a diplomatic argument with Canada now, making visits more complicated.

At Beidha near Petra is a camp with day trips on camels but let’s be real here, it’s for young people who can sleep on the ground all night and still stand up uncrippled in the morning. On the other end of the scale are the stunningly expensive Abu Dhabi luxury versions in the Liwa desert. Sinai resorts sound grossly over-commercialized. Iraq is still rather scary.

While I wait for Syria to settle down, it’s tempting to plan a solo trip. Oman has the lure of The Empty Quarter desert. Israel has the Negev desert with the plus of a near-relative living in Jerusalem and a minus for a camel farm with extremely spartan (the aching back again) vegetarian overnight quarters. Wadi Rum in Jordan is burnt into my psyche, having visited twice and loved it. Lack of Arabic and nuances of the language, without a reliable and fluent interpreter, would be like an egg without salt.

Verdict on hold as political events unfold. One more nostalgic review up my sleeve. Then, ... what would Gertrude Bell do? Need I ask. I leave you, temporarily, with this pithy Arabic proverb:
“On the first of March, the crows begin to search.”

Happy Easter, Brenda! I share your feelings about the impact of political unrest on the ability to travel. Incidentally, I usually eat my eggs without salt. What do you suppose that says about me?
Warm regards, Steve

They just blew up Marrakesh so I'm outta Plan B options. Steve, I'm glad you still have your mustache since I didn't complete the entire homily that says a kiss without a mustache is like an egg without salt. Maybe you are just careful about your blood pressure! :-)