April 6th is Tartan Day in Canada and the U.S.A. See my new favourite tartan. 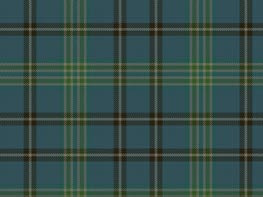 Chris who blogs at Scottish GENES will freak if he ever sees this. I respect Chris very much but he is death on spurious Scots regalia and I’d like us to be on speaking terms when he lectures in Toronto in June. He has written plangently more than once about the “Scottishness” industry created in the 19th century and embraced ever since by commerce, tourism, and us in the diaspora. I happen to agree with much of what he says. A kilt manufactured just-so does not a Scotsman make. Nor is it a symbol of the historical, agricultural Lowlands. Revisionist cultural trappings do not define ancestral identity.
Nevertheless, it would be impossible to erase the ensconced images of Scottish heritage portrayed by pipe bands and regimental dress and clan associations.

One can admire a tartan without submitting to dress code rules our Highland ancestors would have laughed at. In our modern age, new tartans are being designed by disparate organizations. Some of them are very beautiful. They can be admired per se – as a salute to certain traditions, even though some may be twentieth-century traditions. The Arinagour primary school on the Isle of Coll held a competition for an island tartan design. The winner (above) was 8-year-old Maria MacIntyre, inspired by the natural colours found on Coll—sea, sky, heather. The ancient skills of weaving and design have continuing resonance in quiet places.

Photograph from The Laird of Port-À-Beul, http://www.lairdofportabeul.com/English%20Frameset-.htm
Tartans are very familiar to Canadians. The Royal Canadian Air Force (RCAF) tartan has its own tradition. It was officially registered on 15 Aug. 1942 by the Lord Lyon King of Arms of Scotland.[1] The distinctive tartan disappeared after amalgamation of Canada's Armed Forces in 1968 when a generic uniform was introduced. In fact, stocks of the fabric were destroyed. The RCAF Association managed to preserve an official sample, and the tartan was later reinstated. 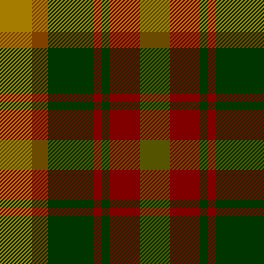 Photograph from Clans and Scottish Societies of Canada (http://www.cassoc.ca/tartans.htm).
Tartans are SO familiar to Canadians that last month the Maple Leaf Tartan was approved as an official symbol of Canada.[2] Along with the maple leaf and the beaver, the tartan is now one of the official symbols of the country. You can see the colours of the maple tree reflected in the fabric.
“Tartan Day” is celebrated in Canada and the U.S.A. on April 6th as a tribute to Scots ancestry. As Chris might ask, how many of the enthusiastic celebrants know their ancestors? Meaning taking the time and trouble to determine their actual place of origin and learn about their lives. And how many Scottish descendants recall that April 6th is the anniversary of the Declaration of Arbroath?[3] Independence for Scotland has had many a battle in the 691 years since.

When I visited Toronto last year for the OGS conference I made the very last minute decision to drive over to Kincardine "on my way home" (it was only 3 hours out of the way!) As I was driving across Ontario I happened to be going through a small town when I heard bagpipes. Looking over I saw a church and a man wearing a kilt and playing the bagpipes. (I believe it was a wedding) It was wonderful ~

Next to camels, a man in a skirt is one of my favorite things to look at!

I wish I'd remembered to celebrate Tartan day although I don't have any thing in the Anderson tartan that fits anymore!

Thanks for comments, guys! My old McDougall skirt shrank too :)
Diana, my heart just starts pumping overtime when I hear the pipes.
Sheri, we agree. As long as it's a man-skirt!