I have a concern that images are not only not always loading into Blogger, but also previously posted images keep disappearing! What's up with that?!
Half of my personal heritage is Latvian which deserves equal time with the Highlanders. The great cosmic question is why this heritage saddles me with two languages incomprehensible to 98% of the world’s population. My formal schooling was sorely negligent in vocational skills. True, French is ours for the taking (“ours” = we anglophones in Canada). It’s useful if you watch the French TV channels or if you lose the English instructions for how the garage door-opener works. Doesn’t do a darn thing for my family history, though. 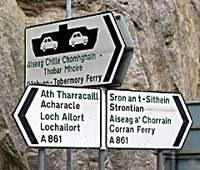 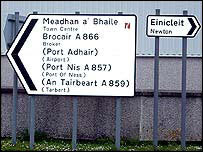 Admittedly, few historic Scottish records were created in Gaelic and certainly none about my ancestors. But the language renaissance is very visible when visiting the Highlands and it’s often surprising how many inhabitants are bilingual when they want to be. Learning a few words is almost a familial duty if only you could scale the pronunciation wall. It always amazes me that my great-granny Campbell (1845-1924) whom I never knew, born and bred on Cape Breton, lived and died in Gaelic. Image: BBC News. 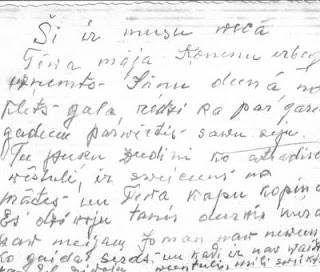 Latvian language presents its own unique twists. Rampant, strange, diacritical marks. Exhausting to reproduce in a regular word processing program. However, the best of news: All the church registers and important lists of estate inhabitants up to about 100 years ago have been digitised, freely available, on Latvia State Archives’ wonderful Raduraksti database. Image: Family postcard, BDM collection. 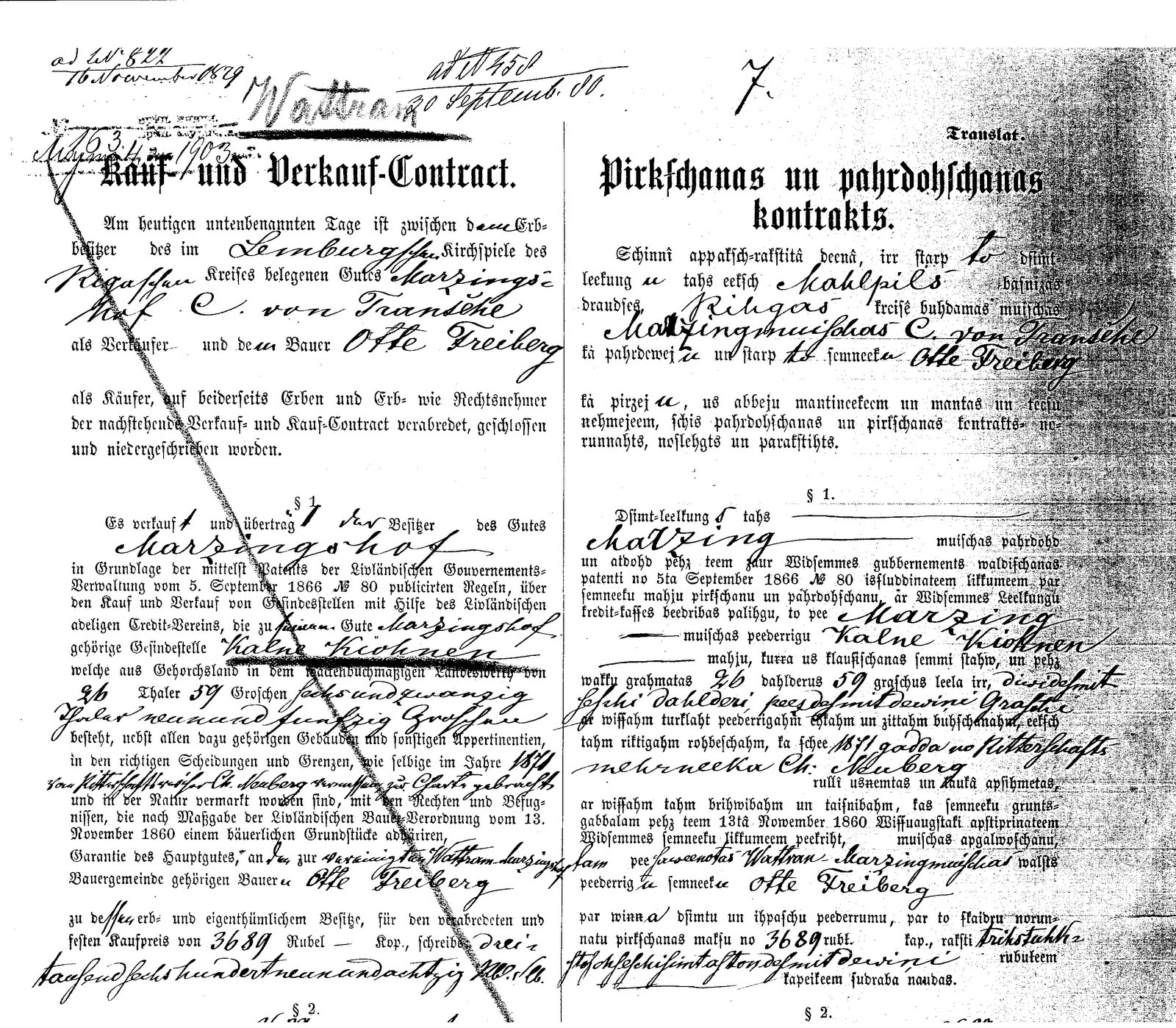 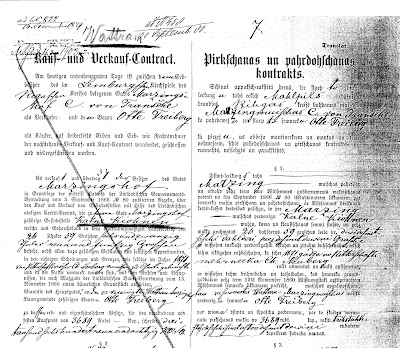 Problem is ... before the First World War the majority of records in what we call Latvia were created in German by the Lutheran pastors and landowning Baltendeutsche (but the personal names are usually recognizable). Image: Van Tranche to Freibergs, Wattram estate, Kalna Koneni land registry, 23 April 1878; Latvia State Archives 1615.6.1149, p. 7.


If that’s not enough of a headache, my grandmother’s family converted to the Russian Orthodox church 170 years ago, and guess what language their records exist in?
[Russian document finally loaded after days of trying, but it doesn't show here on the blog! It's there in the html code so why is it hiding?] 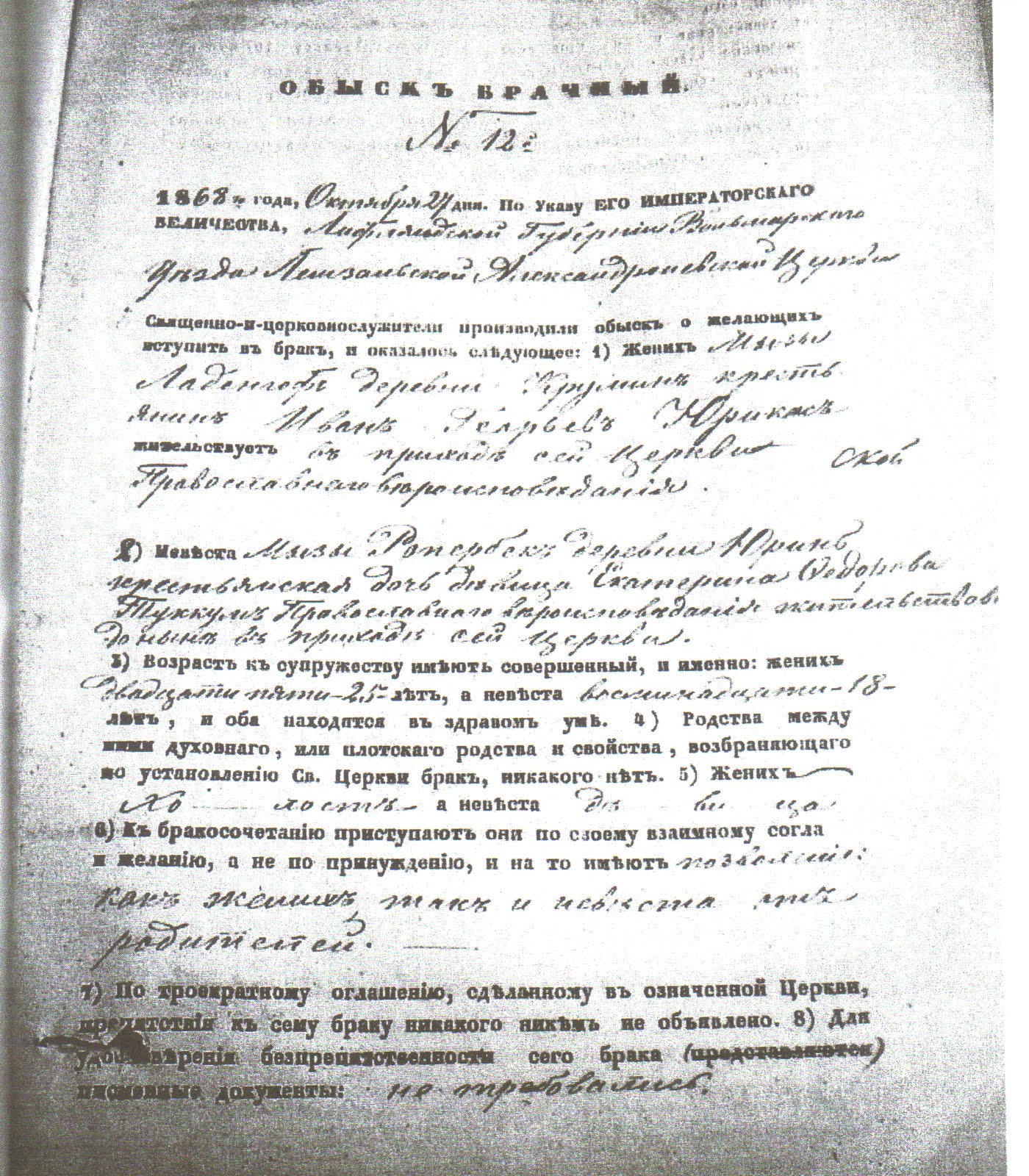 It doesn’t stop there, either. That particular family originated in Estonian territory. I spare you an illustration of an Estonian record. My newfound Estonian cousin best friend forever is Swedish. She has about ten words of English. Ten words more than I have of Swedish. Communicating with each other is way better than sudoku for stimulating the brain overtime.

Hindsight tells me it’s OK I didn’t take a crash course in Latvian. As research progressed, so did the  realization my multilingual ancestors would have sent me cross-eyed fumbling off the deep end. A spreadsheet is calling. Just gimme the essential born-married-died words. Yes, nuances and perhaps even important notes could be missed with this callous attitude. That’s why we have resource people to call upon!

Picking up the necessary written words is akin to learning enough spoken words for foreign holiday travel—sufficient to impress yourself, if not the natives, with please, thank you, and where is the toilet. We’re not particularly going for verb tenses or gender endings, right? Fortunately, in family history application we needn’t create whole sentences in another language. Or would you argue?
Posted by BDM at 10:15

Let me know if you need some help with the Russian. And I think I have a Latvian dictionary at work, though I am not familiar with inflected forms in Latvian.

Very kind of you, Greta! I may call on you yet. So far my resource people are keeping up with me :-) fingers crossed.
- Brenda

I have a Russian on hand for translations, as well as a Latvian friend who also speaks fluent Russian. Neither of which are any use to me but feel free to send things to be translated!

I should have remembered the Russian at hand :-)Thanks for the support.