Large chunks in the life of this man--sibling of a direct ancestor--are still missing. Mysteries abound. For the lucky, newspapers provide clues or even fill some biographical holes. Newspaper items can remind us our ancestors were human and faulty just as we are. Perhaps we can relate to long-past transgressions and crimes because of the news we are immersed in today. Aside from the event itself, in some cases we might learn how the community responded, an insight to social sensibilities. Dealing with something a couple of generations ago, we have distance from the contemporary emotional consequences and pain.

Hector McFadyen was born 28 December 1869 in Provincetown, Massachusetts, the son of John McFadyen and his wife Isabella Campbell, both natives of Cape Breton.[1] Hector's parents had married in the same town in January of that year.[2] What were two Capers doing far south of their home province? The family story is that the couple had sailed to "the Boston States" to sell their boat and make a stake to buy land in Canada's Northwest. John planned to change his occupation from seafarer to farmer.

Hector was a child when they arrived in Oakbank, Manitoba (also known as Sunnyside, and later Springfield), where his father duly staked his homestead claim in 1874 to a quarter section (160 acres) of prairie land.[3] More pieces of property were acquired as the family grew. The oldest of ten children, Hector probably learned farming at an early age. He appears to be the single man, age 31, a sole head of household at Springfield in 1901, where he was farming not far from his parents.[4]

The next thing we know of Hector is his marriage on 6 August 1909 to Katherine Grace Polley, born in Ontario to New Hampshire natives Albert M. Polley and Flora Fuller.[5] In British Columbia! By this time Hector was almost forty years old. Whether he had moved to BC or was visiting or engaged in farm business, we simply don't know.

Grace's family provides a clue for the distant encounter. Her father Albert Polley was quite an entrepreneur in mail and passenger stage service to northern Ontario towns from his base in Goderich.
But Albert's love of horses was paramount.[6] He bred and trained them in his stables and racetrack near the town and expanded to horse markets in Pennsylvania and British Columbia. Probably through his connections along the way---did his daughter travel with him?---Grace met a fellow horse lover called Hector McFadyen.

Hector has not yet been located in the 1911 census two years after his marriage. His wife Grace McFadden was then living with her parents on North Street in Goderich, Ontario.[7]

Our intermittent chronology now skips ahead to 1921 when widower Albert Polley died.[8] Grace inherited $986.00 from him while her single sister Charlotte was given the North Street house.[9] At about 11 p.m. on the last day of February 1923, smoke came pouring out of H. McFadyen's Grocery Store on the corner of North Street and the Square in Goderich.[10] (It seems Hector had relocated to his wife's home town and established a different kind of business.) Firemen were prompt and reported next day that losses were not heavy but the living quarters above the store, inhabited by Misses Elliott, were damaged. A short circuit in basement wiring was the suspected cause. 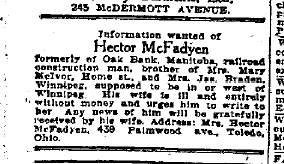 A few days later, March 6th, this notice was inserted in a Winnipeg newspaper, appealing for information of his whereabouts.[11] He was described as a "railroad construction man" and thought to be in western Canada. To the point, the notice said his wife Grace was "ill and entirely without money and urges him to write to her." An address was given to contact Grace in Toledo, Ohio. Two of Hector's sisters in Winnipeg composed the notice, likely after being contacted by Grace or someone on her behalf.

A second newspaper notice with more desperate overtones was published on March 7th; apparently from Grace herself:

"Your wife is ill and absolutely without money, do not be afraid to write. I have legal advice the police cannot hold you for fire. My furniture is held for heat and light.Mrs Grace McFadyen, [address withheld], Toledo, Ohio."[12]


Oh, the questions! Was Hector to blame for the fire? I suppose he scooted out of Ontario on a train. Certainly the families were communicating between Ohio and Manitoba. But why was Grace living in Toledo? Had she and Hector actually lived together in Goderich for some time?

March 22nd: Grace died in Toledo at the home of her sister, Mrs. W.B. (Helen) Major.[13] Her remains were shipped to Goderich for burial with her parents in Maitland Cemetery; her name on the stone is Grace P. McFadyen.[14] The local death notice does not mention her husband. Ironically, on the day she died, the same newspaper published her petition to initiate bankruptcy proceedings.

Hector's life after 1923 is yet another blank, with only a few clues on his death record. He died 18 November 1944 in Kamloops, BC; the informant was a man who lived at the same residence.[15] Hector had lived there less than two months before his death. Described as "contractor," his former address was Haney, BC, a small place east of Vancouver on the CPR railway line. Typical of families dealing with a black sheep, the McFadyens generally suppressed speaking of him to younger generations and Hector's full story was lost.

The value of newspapers in family history research can never be overestimated. They can help develop the three-dimensional ancestor. Let's applaud all who digitize newspapers and those who make them searchable!