For years this group photograph has puzzled me. A family reunion, surely. Some of the faces, particularly children, looked so familiar it was like recognizing family faces today. But who were they? No notations on the back. Was it a group of McFadyens in Cape Breton? Dougalls in Manitoba? Frasers in Quebec would be dark horses. I go around in circles. 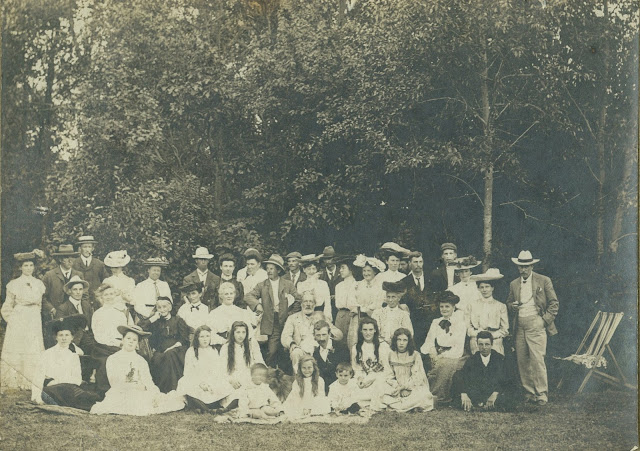 Whichever family it might be, I wasted a lot of time straining to identify my father as a toddler, thinking it could be the 1890s. Is he the little guy who made a blurry move when the dog nuzzled him? I am hardly astute enough to identify what kind of trees or terrain they chose for the commemoration.

As for dating, likewise I'm no costume expert but a little research helps (or not). The ladies' hats, the extravagant brims (on most of them), and their dress in general might suggest the Edwardian era prior to the First World War. If so, I then reasoned, chances were my Dad was in there as a bigger lad. The only one he could remotely be is the young fellow at the back left. Good gawd, is that a cigar in his mouth? His height and appearance would make the photo on the eve of the War.

One suspects that those seated have some precedence in the arrangement. Eventually I concentrated on the patriarchal figure in the middle. (My grip on the Paint Program needs work.) He has an unidentifiable child on his lap. His cheekbones remind me of numerous Dougalls. And yet, if he is Peter Dougall (1824-1914), evidence shows he became thinner and more gaunt in old age.

... both identified as Peter Dougall.

I have no photos of John McFadyen (ca.1837-1915) for comparison, except a grainy newspaper image published with his obituary.

Then there's the wife. Both men would have had living wives. The hatless woman seated to his right does not seem to be Catharine Fraser, Peter Dougall's family-described "diminutive" wife. So how about the tiny woman in black with the bemused expression seated to the left of hatless? My first impression was that she seems much older than anyone, wearing widow's weeds. Is that a cross on her bosom? Did Presbyterians wear crosses? Is she Catharine's mother Nancy Fraser? But Nancy died in Renfrew in 1895! Is it Peter's mother? No, she died in Montreal in 1878! Or ... how old is this picture anyway?!

If the patriarch is John McFadyen, his wife Isabella Campbell is another who left no photographic traces. I am throwing McFadyen scenarios in to demonstrate an (almost) open mind but am about to abandon it. Even as I write, I am switching back and forth between family photos. The woman seated two places to the patriarch's left with the collar bow closely resembles Peter Dougall's daughter Annie Elizabeth Hemenway. Annie married in 1884.

I'm also thinking the two women flanking widow's weeds have a certain resemblance. Peter had four daughters. Are they and his wife the seated figures closest to him? My original dating theory may be way out of whack.

Well, if they are Dougalls, I can't find my grandfather William (1854-1934) based on his old age portrait. More vexation. Unless he's the handsome guy with the cheroot. Would you say the woman in front of him is wearing glasses? William's wife Jessie is the only ancestor I've seen who wore glasses in her portraits. They were married in 1894. Maybe my Dad's merely the proverbial twinkle in someone's eye.

Peter Dougall also had five sons. Certainly there are many spouses included here to confuse the issues of who's male family and who's an in-law. Not to forget the fun-loving spinsters and bachelors---I'm sure they are the ones who dared to smile and laugh on a sedate occasion. Peter and Catharine retired from their lifelong home in Renfrew, Ontario, to Winnipeg, Manitoba in 1905. Either place could be the setting for the photograph. And probably much earlier than my previous guessing.

Such a unique treasure to have. If only I could sort it out. Have you run into a similar problem?

Cool, I don't think I've seen this photo. Maye you could pinpoint the date by sharing it with someone in a costume studies department at a univerity, or look up a costume / texile / fashion expert at the ROM?

Good suggestions, Cathy! It's one of those "to do" tasks that slips to the bottom of the list.