Instead of a genealogy problem-solving post, more pressure from the biographical division of blogging. As anyone can see, it's an uphill struggle to stay on top of The Book of Me, but can't let the side down now. The project has a fatal attraction if only because I keep saying to myself who knows "me" better than "me" and let's face it, genealogists have a congenital desire to keep the record straight. We have principles.

The Year I Was Born (Prompt 12) had WAR in it. Like really, what else do we need to know about that? With no personal memory of the year I can attest that the war had an exciting conclusion called V-J Day when all the grownups in summer camp country went nuts, donning outlandish costumes, making a celebratory procession from house to house, trailing fumes of whisky and the occasional soul lost in the dark. Dr Langtry dressed up like Alley Oop (of vintage cartoon fame) and broke his ankle tripping over a chamber pot.


Creator of this series, Julie Goucher, probably suspects some of us are slacking so she makes it more complicated. If I got the message correctly (note to self: go see what other Geneabloggers have done with it). Special/Iconic People (Prompt 13) is about having no more than twelve people to your home for a proper meal. Celebrity people, famous people, living or dead. Fantasizing, shall we say. I am also fantasizing I have a dining room any more. It's not to include any ancestors because Julie is going to throw that at us next up. 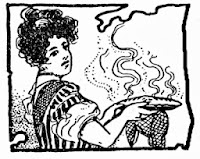 Plus, what food would you serve? A tall order, that. If I still lived on the farm I could have a corn roast and that would be that because I have totally forgotten how to cook. Maybe throw in some Octoberfest sausages for the barbecue. No, save that idea for the relatives. I'm breaking into a sweat here, trying to remember all the gourmet meals I used to make from scratch; celebrities deserve a little more fuss, don't you think? Musing along the lines of suckling pig with preserved crabapples and a green veg — how's that asparagus doing in the garden patch. A little Calvados in the dessert soufflé, hmmmm?

It gets tougher. Whom to invite? Thinking we should have dinner music but hey, would kd lang make an appearance? Get Grandma's humungous crocheted tablecloth out of the cupboard. The guest list is hardest of all. First I made a long list. It got out of hand right off the bat, a huge traffic jam in my flailing onward progress. Categories something like the Nobel Prize has would have eased the project. Am I going to choose writers? Politicians? Musicians? Historical greats? Shit disturbers? I'm exhausting myself already, suppressing the thought that the future with Julie promises even more hard work.

Anyhoo, a mix of the quick and the dead: Gertrude Bell ranks right up there with Emma from one of my favourite blogs; Jo Nesbo and Christopher Hitchens are a must; John Cleese and that delicious rake Peter O'Toole at about age 50 (eliminating the need for George Clooney as eye candy); Mary Stuart, Queen of Scots, and Anna Politkovskaya; CC Landon, cherished philosophy professor of my formative years, and Dr. Donald Low would add to the growing ecumenical flavour. How we doing? Eight. We will need translators; do they count? Let's add Alexander the Great and Miriam Toews and Leonard Cohen and Col. Chris Hadfield.

There. I see I am building a noisy evening of opinionated rascals and ideologues. Let's hope the wine settles them into a mood of respectful rapport. Oh dear, the wine list; the house wine Goats Do Roam seems a bit plebeian. I shall be slumped in a corner making weak efforts at maintaining order. Horrors, for sure I am omitting some really great people I want to meet. Must save the long list for another time.

No principles were sacrificed in the creation of this post.