December had a sneaky way of accelerating while I was on pirate watch along the coast of Yemen and we find yours truly unapologetically unprepared for the festive season. At this rate, The Annual Letter might surface in February.


Besides, it was not the best of years. Sickness and death hovered. Genealogy for a large part was ignored. Nonetheless a few things did get sorted.

My Camelogue® was published with ShopMyBook.com and has sold a whopping sixteen copies, pleasing me no end. Wouldn't you know it, updating looks like a future requirement since recently visiting Oman and the UAE. But not too soon in the future. Abu Dhabi and Al Ain are still on my bucket list.

I believe I've satisfactorily demonstrated that the "first house in Toronto" as designated by a local archaeologist was built by George Porter, not John Small.

In April with two of my daughters I had the greatest pleasure in meeting my Latvian cousins. Visiting the farms, churches, cemeteries, and environs of two different families created warm, indelible memories.

My brother and I were very happy to see publication of Jacq Cook's The Real Great Escape, in which our father's First World War POW diary is excerpted.

I found a camel in Toronto in 1906. And I found just the right room-mate. Smiley face. 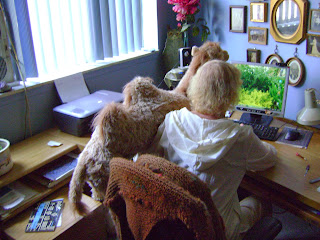 Since little other than travel euphoria is percolating in my vacant brain and Christmassy things often end up cranky and disruptive with the dyspeptic feeling of why did I eat all that lovely tempting food (Hello Scrooge), I bring to you some educational historical material to illustrate the dangers of overdoing the festivities. Summarized from the December 2012 ScotlandsPeople Newsletter:

The 16th-century Scottish Kirk reproved the populace for customary Christmas season activities as "popish superstitions." Christmas was to be treated as any other ordinary day; only the Sabbath was to be regarded as holy. Apparently the joyful but denounced festivities included playing cards and gambling, "masked dancing with bells, selling yule loaves, cross-dressing and 'extraordinary drinking.'" In December 1574 fourteen women were reprimanded in the St Nicholas, Aberdeen, kirk session minutes for "plaing, dansink & singing off fylthe karellis on youll day."

Obviously the Kirk faced a losing battle and our activities have not changed a lot although let me know if you've heard a filthy carol lately.