Plod and slog does not refer to my blog. Am plodding on a revision to my Genealogy in Ontario: Searching the Records. And what a job. The last really effective revision was in 1996 and the world of genealogy has changed incredibly since then. 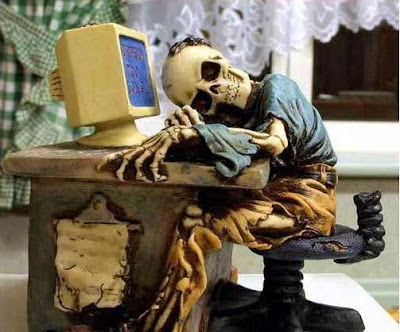 Equally incredible to me, by the time the 2008 edition appears, it will be almost 25 years since the first slim version was published in 1984. Originally, writing it for the Ontario Genealogical Society was a trade-off for me. I was able to weasel out of organizing their first Church Registers Project and write something for them of which I knew better.

With revisions or new editions in 1988, 1996 and 2002, I lost track (probably OGS has too) of how many copies have been sold, but it must approach 10,000 by now. I’m told that is beyond what is considered a “bestseller” in Canadian publishing terms, but what do we amateurs know. Amazing to some, but not to me, how many North Americans have Ontario roots or branches. The first two editions bore a cover designed at my vague direction by one of my artistic children, another satisfaction.

The fourth edition has the advantage of a unique friendship to steer me among the reefs and keep the jib trimmed. At last, I am learning about writing and editing. Meanwhile, the blog suffers from inattention.
Posted by BDM at 22:19