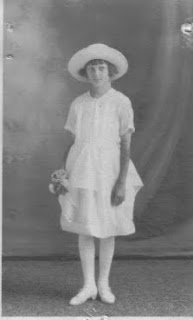 My mother posed for this ca.1925 so all the relatives back in Europe could admire the couture. I can’t say how Canadian it was, what with maternal grandmother probably sewing her fingers to the bone over her imported fashion magazines. Somehow I sense that Mom might have had hysterics at the thought of wearing this to where? School? Check the cool shoes. Where on earth did they come from? Not Thunder Bay.
This must have been a little later. The teenager posed for another demonstration of the good life in Canada. Despite the solemn pose, you can see the flapper era beginning with all the influences it spread. Fab hat! Grandma was really knocking herself out.
Mom in the 1930s (the overseas relatives are insatiable). I try hard to imagine what that coat was made of. And hey, is that a precursor on her head of the trapper’s hat popular today? Nevertheless, I think this girl just wants to go places and have fun. 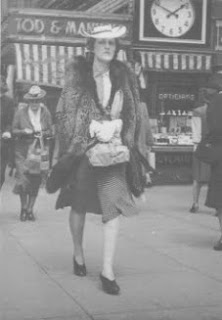 Fast forward to matron status. I just had to show this. Taken by a street photographer in Vancouver, 1940s. Remember street photographers? It must have been windy. Otherwise that would have been a very strange hat. But get a load of the furs. A load of foxes. Where are they now? I could use a few to stop the drafts in my window. Anyone recognize the Vancouver street?

So ends a little venture into Canadian fashion of one era. Until I can find some of those 50s and 60s amusements. Almost makes me yearn for the days of dressing up to go to balls. You supported those events because they were good causes and you did glamour. Now we mostly get glamour vicariously from celebrity watching.
Posted by BDM at 10:08

I really enjoyed this post Brenda! I am a big fan of the Art Deco period and the elegant design of everything from industrial to fashion from that era appeals to me.I find that when surfing the channels, more often than not I end up watching the TCM black and white movies from the 30's and 40's. Thanks for the post!

I went through a box of old photos when I was home last week and my relatives wore some interesting fashion statements too! Maybe I should enter that contest!

Greetings Brenda,
I am so glad you participated in this edition of the CGC. Great post and fab photos! I hope you can find some more photos from the '50s and '60s.
~Kathryn

Brenda, you have an awesome site, love it. Am giving you the Ancestor Approved award you can pick it up on my site acadianroots.
congratulations
Aline

Thank you for the award, Aline! I'm enjoying your blog and all its related activities. Such a busy lady!