Some time ago I extracted a few random items from Isle of Coll kirk sessions minutes HERE, HERE, and HERE to illustrate the eighteenth century content and language. I promised myself I would do more ― proper transcripts ― because I have printouts of the entire works. Grateful thanks to my friend Victoria, Canadian ex-pat and archivist in Edinburgh.

Coll is in the inner Hebrides of Argyll, a geographic "twin" to the Isle of Tiree with which it had a shared parish history for a long time (Coll has always had a smaller population than its sister island). Savvy researchers know that the oldest surviving Coll baptisms and marriages were recorded not in Old Parochial Registers (OPRs) per se, but in minutes of the Kirk Sessions.

National Records of Scotland (NRS) have the surviving Coll records in CH2/70/1 (Kirk Sessions 1733-1813) and CH2/70/2 (Kirk Sessions 1813-1872). They've been digitized and can be viewed in the NRS Search Rooms on their Virtual Volumes system.[1] Several regional archives in Scotland also have access to the service. Kirk Sessions are not currently available on ScotlandsPeople but the NRS plan to begin placing them online in 2017 "following the re-launch of the ScotlandsPeople website in 2016."

However, despite the CH2/70/1 description, there are no session minutes for Coll between 1735 and 1776, more than a generation. Although Coll had a resident assistant (Mr. Hector Maclean) during that time, the minister of the dual-island parish resided in Tiree; if minutes or a register were kept in Coll they have not been found.[3] Also, Coll researchers have noted in the later records that marriages about 1780-1792 are missing, a period coinciding with the lack of an assistant minister on the island.

One might ask, since Tiree OPRs begin/are available from 1766, do they contain Coll baptisms and marriages before 1776? The answer appears to be only if a Coll person came over to marry a Tiree person, or presented a child there for baptism.

I propose to transcribe the few pages of the earliest existing minutes. While the NRS and FHL both give "1733" as the start date, I find the first entry is 1732. Spellings are "as is" or as best I can decipher. Square brackets indicate guesses; lines ---- indicate indecipherable letters or words. Note that patronymics are still in usage in many instances. Unfortunately the width of the blog's column makes it awkward to keep each line on one line. Let's begin with the first, the only entry in 1732; the month was not given: 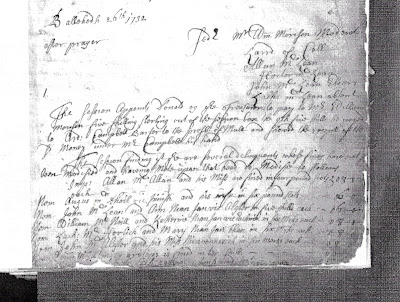 Ballohodh 26th 1732
after prayer
[Sedt]* Mr Wm Morisson Moderator
Laird of Coll
Allan McLean
Hector McLean
John McLean                    Elders
Lach: McLean absent
The session Appoints Donald og [ye?] Treasuror to pay to Mr William
Morisson five shilling Sterling out of the session box the [9th?] five shill his people
to And: Campbell Bursar to the people of Mull and [showed?] the r[eceip]t of the
sd money under Mr Campbell his hands
The session finding of --- are several delinquents whose fines have not
been modified and having M--- upon that head do modify as follows
I---: Allan McAllan and his wife are fined in four pounds ---- 08
each
Nom Angus McDhoil vic Jamish and his Miss in six pounds ---- 06
Nom John McLean and Ann Man Jan vic Alister in six shills each 06
Nom William McNeill and Katherine Man Jan vic Eachnin in six mks each 08
Nom Lach: McHorlick and Mary Man Jan bhan in six mrks each 08
Nom John McAlister and his Miss Shiavonn----h in six merks each 08
Nom Donn McAllan og aroloss is fined in ten shill 00
[last line torn and illegible]
(next page)
The session Appointed the Minister to ----- to Mr John McLean to
cause Eann McAllan og aroloss fornication pay his fine of ten shills
Ster:      The session being informed that [some?] two women came
from Barra who have brought forth children here since they came
the one in fornication the other in adultry as its to their fathers being
in Barra Therefor the Presbty appoint [Jo?] T---- forth with to go
and cause them leave this country otherways if they do not obey they will
meet with more [ink blot] treatment this was intimated to the bod--
The session Appoints [ye?] Collector to give John McNeill
vic Dhoil[ink blot] blind boy three merk--- out of the former fines
Also[ink blot] Mary Nean Neill a ffool three merks out of the
sd fines[ink blot] they Appoint [Ihan?] Ian vic Lachlan in Arnabost
three Merk[ink blot] of the sd fines Nothing else occurring they closed
---- --[ink blot]

* No doubt the abbreviation for sederunt meaning they were seated, but more formally to indicate that a church session was underway.

Any corrections or additions are more than welcome.

[1] http://www.nrscotland.gov.uk/research/guides/church-court-records-online.
[2] See "Tyree, Argyll, Scotland," in the FamilySearch Wiki (https://familysearch.org/learn/wiki/en/Tyree,_Arygll,_Scotland).
[3] Nicholas Maclean-Bristol, The Kirk on the Hill, the story of the church in the Isle of Coll AD 550-2007. Coll: The Society of West Highland and Island Historical Research, 2007.

Brenda,
excellent to see this. I have been into the Edinburgh archives (circa 2007) and brought back copy of the full 1776 list of inhabitants. I knew there were earlier records but didn't have the time back then, BUT, now retired.
Glad to see the older records may be online before too long.
I also have a copy of Betty McDougall's handwritten records of Court records - Tobermory I think - and involving Coll folk. Haven't even started work on typing up these.
Regards, Ewen
ewen.mcgee@ntlworld.com

Thanks, Ewen. It would be very interesting to see Betty's records on a website or blog. She knew so much about Coll yet so much of her family research is not available. I hope you will seriously undertake that project!